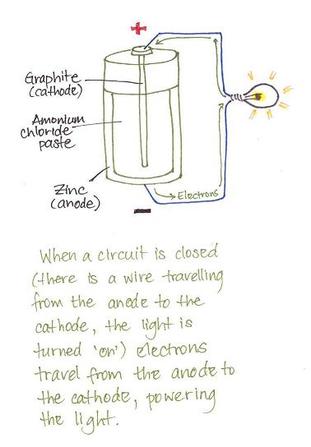 Figure 1
This topic was chosen as batteries and how they actually work has always been something of a mystery to us.  Research was conducted using books, the internet, and by talking with friends who are majoring in engineering.

An effort was made to understand why the combination of copper/zinc/acid creates electricity in a battery.  Figure 1 shows how the electrons travel from the anode through the circuit and on to the cathode.  Once in the inert cathode the electrons pass through and bond to the amonium chloride.  As it was explained by fellow students, the zinc is ‘happy’ to have the two extra electrons but will ‘willingly give them up’ to copper which has space for the electrons in its outermost shell (figure 2). There is a very strong attraction from the copper to the extra electrons on the zinc which ‘pulls’ the electrons from the anode to the cathode when a circuit is closed. 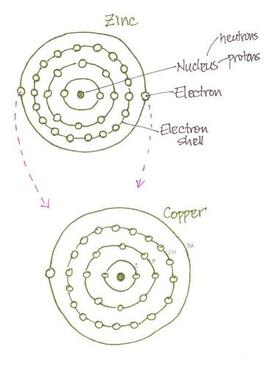 Figure 2
Each electron has a very small amount of energy.  As the electrons cross the circuit they pass through the light bulb (figure 1).  In the light bulb is a tungsten filament which has a small amount of resistance to the electrons.  This resistance is akin to friction which causes the tungsten to heat up and glow, creating light.  The electrons continue on through the filament and down to the wire which carries them to the cathode.

The penny battery needs an electrolyte, a medium that allows the electric charge to flow between the cathode and the anode.  In this case the electrolyte is vinegar which is held in place by being soaked in discs of cardboard.  With five cells stacked up a charge can be generated that is great enough to light up a small LED light bulb.